The smoke detector has been a tool for American home safety for 50 years. The first smoke detectors were powered by 9-volt batteries and cost around $125 each (which was a lot in 1970). As technology became more functional and less expensive, both the range of capabilities and the affordability of smoke detectors improved.

Consumers now have several options when it comes to smoke detector installation. They can choose among different brands, functionalities, power sources, even smartphone connectivity. Regardless of the advantages and disadvantages of these different options, it’s most important to have a smoke detector system that’s dependable, responsive, and in continuous operation.

In 2018, 3,810 Americans perished in house fires. Most of these fatalities, according to the Consumer Product Safety Commission, were the result of smoke and toxic fume inhalation, rather than burns. That’s because smoke and gases spread more quickly than flames, and it’s harder to avoid inhaling them than it is to escape burn injuries. Most deaths occur when families are asleep, and they’re not conscious of a household fire until it’s too late.

This is, of course, the most pertinent benefit of smoke detector installation. These devices monitor the inside premises for the presence of smoke 24 hours a day, going off at once when smoke from a fire reaches its sensors.

When it’s loud enough to awaken an entirely, a smoke detector can be the key factor in escaping a burning building in time to save one’s life — indeed, two-thirds of all home fire fatalities happen in houses that have no smoke detection or alarm systems. Smoke detector installation can reduce the risk of death in a burning home by 50%.

How many smoke detectors does my home need?

The National Fire Protection Association (NFPA) established a baseline for the number of devices a home needs to get during smoke detector installation. They recommend:

If you own a 2-story house with four bedrooms all on one floor, that’s a minimum of six smoke alarms — seven if you have a basement.

For those more inclined to specific measurements, the NFPA has more exact guidelines. A smoke alarm covers a radius of 21 feet, covering 1,385 square feet. They recommend that two smoke alarms have a maximum distance of 30 feet between them — meaning if you have a 50-foot hallway, one smoke alarm should be placed at either end.

Officials also recommend keeping smoke alarms away from kitchens and bathrooms, since those rooms often generate smoke and heat that can trip smoke alarms. Although that’s a great reassurance that they’re working properly, it can get to be a nuisance.

What type of smoke detectors should be installed?

As with any product, there are many different features available in smoke and CO detectors.

Ionization smoke detectors are excellent for their quick response to flaming fires. They’re not quite as effective for smoldering or low-smoking fires. For protection against those kinds of fires, you may opt for photoelectric or optical smoke detector installation.

Photoelectric smoke detectors use a tightly organized light source and sensor. When smoke reaches the detector, it scatters the light source and triggers the alarm. They’re more sophisticated devices that can alert house residents in case of the most common types of house fires, although they’re less successful at detecting fires with heavy flames.

The NFPA recommends that homes use a mix of the two types of smoke alarms. You can also get smoke detectors that combine both methods.

You can also get smoke detectors with a variety of special features, like voice alerts, pathway lights, strobe lights, and vibrating alarms for the audio impaired. Another new feature available is wirelessly interconnected smoke and CO detectors. These units allow the installation of an interconnected smoke detector system with no wires run between the units and are ideal for a retrofit installation. Smoke detectors are available that connect to your WIFI and can send an alert to your phone when they go off and be reset in case of a false alarm.

The power source is another consideration for smoke detectors. The 2 most common types are hardwired with a battery back up and battery-powered. Hardwired units get their power from the house’s wiring and have a battery backup in case of a power failure. Battery-powered units relight completely on the battery to power the unit. Most of the older smoke and CO detectors have batteries that would need to be changed once a year. Low batteries are many times responsible for the beeping noise that smoke detectors make. Units with sealed batteries that last the lifespan of the smoke detectors (10 years) are now becoming the standard. With these units, you never change the battery.

Smoke detectors per the manufacturer generally have a lifespan of seven to ten years. After the lifespan of the smoke detector is up the units may not detect smoke as effectively as they were designed to. Even if all the detectors in your house are of different ages, it’s strongly recommended to replace the entire system at once.

How do I know when it’s time for smoke detector installation or replacement?

It does, however, have a printed date of 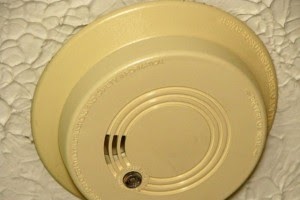 manufacture on the underside of the device. You can check this by removing the smoke detector from the ceiling to verify whether it’s ten years old. As the smoke detectors age, they start to turn from white to yellow. If your smoke detector is looking faded or no longer bright white they are most likely expired.

Do I need an electrician to finish a smoke detector installation?

As mentioned above, smoke detectors come in a wide variety of types, styles, features. Many residents opt for smoke detectors that provide the most basic service for the most affordable price. They only expect the detector to get everyone out of the home before a fire spreads.

Again, this is because a series of electric, interconnected smoke detectors all go off when one of them picks up the first sign of smoke. They also use batteries as backup power sources, so even if there’s a power outage they’ll continue to run, even if you forget to change out the batteries.

Given that an interconnected smoke detection system is your choice, you’ll definitely want a professional electrician to install it. There’s no repair situation involving electricity that’s recommended for novices or do-it-yourselfers to try and finish on their own.

The extreme sensitivity and complexity of electric writing require someone with extensive experience and a sure hand with electrical components. This is especially important with new installations that depend on interconnectivity between two or more devices. Professional electricians are updated on all the latest codes and regulations about electric installations of all types, so they’ll always make sure your new system is legally compliant.

Should you choose battery-powered smoke detectors as a holdover until a more complete, interconnected system can be installed, follow all the manufacturer’s instructions completely. And, of course, don’t forget to install the battery.

Know where not to install a smoke detector. Some detectors respond quickly to incidental smoke or heat produced when cooking a meal or taking a shower. A good rule of thumb is to not install a smoke detector within 3 feet of a kitchen or bathroom door. They should also be at least 3 feet away from fans or return air ducts, where airflow may interfere with the sensor and delay alarm response.

Think about getting an interconnected system of smoke detectors, rather than individual, battery-powered detectors. Smoke detectors that are electrically connected will all sound the alarm when one of them detects a fire. Especially consider getting an entire system installed at once to save money on repeated future installations and per-unit costs.

Aardvark Electric, Inc. helps keep Atlantans safe from the injuries and casualties of devastating fires with their smoke detector installation service. We help you through every stage of the decision process, explain your options, provide reasonable estimates, and complete installation. Call us to set up an appointment today.